On a severely injured ankle, Kerri Strug struggled for balance as she stared down the runway to the vaulting horse. All the years of practice, effort and sacrifice came down to this single moment.  She attempted to collect herself for her final vault in the 1996 Olympic Games.  It would be her very last chance for a medal. The pain and doubt were obvious on her face.  A short distance away, her coach, Bela Karolyi, was confidently and repeatedly shouting “Kerri, you can do it! Kerri, you can do it!”  With those words in her ears, Kerri focused,  and then she began to run, to jump, spring, twist, push, spin, and land on her wounded leg.  Her hands raised in victory, the crowd erupted into wild screaming, and the judges awarded her the Olympic Gold Medal.  Karolyi was right: Kerri, you can do it.

The Can Do attitude is commonly extolled in sport and business as the attitude of winners.  Success, it is often thought, is the result of believing ‘you can do it.’  It is an attitude meant to drive a team or individual to heights of glory by pushing beyond normal or standard boundaries.

There are times when the ‘can do’, ‘never quit’ philosophy is critical to success or even survival.  These times are usually those when there is no downside to holding anything in reserve or having concerns about ‘fighting a battle another day.’ In other words, ‘Can Do’ can get you up to the summit, in under the deadline, or over the finish line.

There are times, however, when ‘can do’ won’t do.  Here are several potential harmful side effects from mis-timing ‘can do’.

1.  Judgement.   Despite the overly optimistic and pervasive belief that ‘you can do it’ always transforms into ‘you did it!” it is not true.  There are times that ‘you cannot do it’, or ‘should not do it.’  These are times for honest appraisal of the cost of ‘doing it’ or the possibility of ‘doing it’.  There are some people, despite sacrificing time and important resources will never gain entrance to an Ivy League school, play in the National Football League, or become their company’s CEO.  Having a ”Can Do” attitude skew your judgement can lead to disappointing and potentially disastrous results. Know your limits.

2.  Short-cuts.   The early and brilliant successes of the Mercury, Apollo and Gemini Space programs fed the belief that NASA was a ‘can do’ organization.  Even in challenging times, NASA personnel got it done–as was immortalized in the movies, “The Right Stuff” and “Apollo 13”.  Over the years the missions grew in scope and expectations, but not the budget or launch schedule.  In order to maintain visibility and viability, NASA needed to have spacecraft in the air.  Reduced resources and increased expectations led to short cuts and oversights in order to maintain the ‘can do’ culture credited with early successes.  Can do can blind an individual or an organization to unrealistic and unreasonable expectations.  In the case of NASA, this led to accepting design flaws that ultimately resulted in the demise of 2 of the 5 Space Shuttles, and with them the lives of 14 astronauts.  Sadly, as I write this, NASA lost another rocket to an explosion yesterday.  When resources and expectations shift, past success should not seduce one into believing ‘you can do it’ will continue bringing success, especially when you are forced to take short cuts.

3. Credibility.  “You don’t know what we are going through.  This is hard!”  Often, this is the silent reaction of team members to a leader extolling them that they ‘can do it!”  In these cases, the team may make the effort, or appear to do so, but not have the motivation to meet expectations they perceive as unrealistic.  In these instances, leaders appear to lack credibility because they lack understanding and sensitivity to how team members perceive the task. In these circumstances it is better to lead by example than by proclamation.

4.  Injury.  Perhaps the most common obstacle for good athletes to never fully develop into elite athletes is injury.  Even elite athletes all too often have their potential, and perhaps careers, clipped short by injury.  Embracing the ‘can do’ attitude, athletes will push so hard in training that an injury, rather than success, is the pay-off for their effort.  A ‘can do’ attitude will also make a minor injury a major injury due to a lack of necessary rest and recovery.  Comparatively speaking in the corporate world, someone may push to the point where relationships are damaged, resources strained beyond replacement, or personnel forced over the edge to burn-out.

When there literally is no tomorrow, and the time is now, then consider adopting the ‘can do’ mantra.  Until then, consider giving each day, each task, and every person the best effort you are capable of at the moment.  There is no shame in looking back on something you tried and feeling in your soul that “I could not have given it a better effort.”  It is the most you can ask of yourself, and the most that anyone else can reasonably ask of you.

About the Author: Dr. Paul Schempp The Character of a Leader 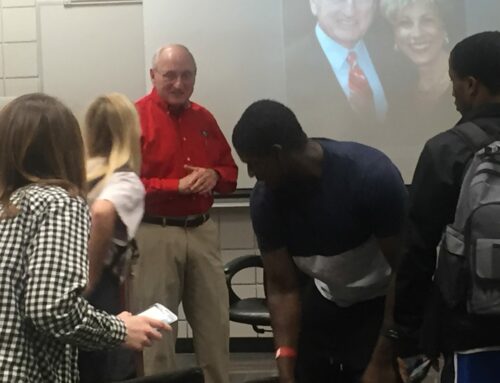 Coach Vince Dooley: “It happened on my watch.” The Skills of Effective Remote Leaders